If your itemized deductions regularly exceed the standard income-tax deduction, you will continue to itemize and realize tax savings from your gifts to us and other charities. However, if you are among the estimated 90 percent of individuals who will not itemize because of the higher standard deduction implemented by the Tax Cuts and Jobs Act of 2017, there are several ways you may still realize tax savings from your gifts.

You can save taxes by:

To better understand these strategies, consider the example of Ed and Ruth:

For a number of years, Ed and Ruth have contributed $10,000 to us. Until last year, they had been claiming the $10,000 as an itemized deduction—and this resulted in tax savings, reducing the net cost of their gift. However, in 2018 they took the standard deduction rather than itemizing; and that is what they also plan to do on their 2019 tax return. The reason is that the Tax Cuts and Jobs Act increased the standard deduction to a level above the total of all the deductions they could claim.

Ed and Ruth are over the age of 65, which qualifies them for an even higher deduction than younger taxpayers, so their standard deduction for 2019 will be $27,000. All of the deductions they could itemize for 2019, including the gift to us, will total only $25,000. Consequently, the total tax they pay will be the same whether or not they make a gift to us.

While they plan to continue giving because they believe in our cause, they wonder if there is any way that a gift might save taxes—and thereby possibly enable them to give more. There are, in fact, three ways they could still realize tax benefits. 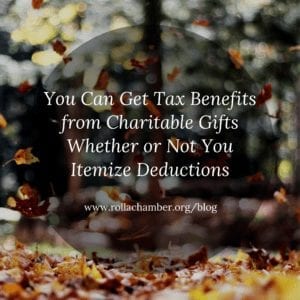 Instead of giving cash, as has been their custom, Ed and Ruth could give some appreciated securities that they had planned to sell. This would eliminate the tax on the capital gain they would otherwise pay. They could then use the $10,000 cash they had set aside for a gift to purchase other securities. The cost basis of these new securities would be $10,000, and only the gain above $10,000 would be taxed if they sell these securities in the future.

A gift of appreciated securities typically results in two tax benefits to you: a charitable deduction and avoidance of tax on the capital gain. If you do not itemize, you do not claim the deduction. However, you still save capital-gain tax.

Ed has a regular IRA; and because he is over the age of 70½, he has an annual minimum distribution requirement. Once received, this entire distribution will be added to his taxable income. But instead of receiving the entire distribution, Ed could instruct the administrator of his IRA to transfer $10,000 directly to us—a strategy known as the IRA charitable rollover. This amount would not be added to income, though it would count towards his mandatory annual distribution requirement. Not having the $10,000 added to taxable income is equivalent to claiming it as a tax deduction.

You may also be able to save taxes with the IRA charitable rollover.

By timing their gifts strategically, Ed and Ruth may still be able to deduct most of their gifts. They typically make their charitable gift in December of each year. As mentioned, they plan to take the standard deduction rather than itemizing because the deduction amount of $27,000 is larger than their itemized deductions, even when including a charitable gift to us.

But suppose that instead of making a gift of $10,000 this December, they make the gift on the first of January of next year and their next gift in December of 2020. Then, in 2020, their deductions including both gifts would total $35,000 ($15,000 of other deductions plus two gifts to us of $10,000 each). They itemize because the total exceeds the standard deduction—reducing their taxes. On their 2019 return they claim the standard deduction as they had planned.

Like Ed and Ruth, you can time your gifts so that on alternate years both deductions fall in the same calendar year. You itemize every other year, and that reduces your taxes over a two-year period. From our standpoint, the gifts are spaced essentially as before.

For more information or questions on tax-saving strategies, contact Phelps Health Foundation at [email protected] or (573) 458-7143.

When should you pay for advertising?
March 2, 2020

Why You Need an Estate Plan NOW Even if You Are Young – Save Your Family Thousands of Dollars and Spare Them Pain
February 20, 2020